YAY, A HAPPY very, very belated ANNIVERSARY TO US!

Time really flies when you’re having fun. The past year has been nothing short of amazing, Alhamdulillah. Han and I both agreed that despite being in a relationship for 6 years prior to getting married, the amazingness (lol) of this one year as husband and wife tops being in courtship for alllll those years. May it remain as fun and loving in years to come, regardless of challenges that may come our way, InsyaAllah.

So for our very first anniversary trip, we managed to squeeze in some time for a 4-day escape to Krabi!

If you’ve been to Krabi, you’d know that it’s a super chill, laidback and *extremely* touristy place. We didn’t manage to explore outside of Ao Nang, except to go on the island-hopping tour on the second day hence our interaction with actual locals was very minimal.

But we had a great time nonetheless though because…

I’m not sure about other hotels/resorts but our stay at Phu Pi Maan was amazing!! It was so nice that we could actually just stay indoors for the whole 4 days and stare at the mountains, if we wanted to. Tell me you don’t feel the same way if your room was facing this…

We took the Premium Spa Room which was so serene. There was also a jacuzzi tub outside at the balcony which Han made sure we utilise it everyday haha (fully clothed because people from the swimming pool could see us, uhm in case you’re wondering 😛 ). A friend of mine who stayed at the Resort for her honeymoon previously was surprised to see our room because I think she had gotten the Deluxe room instead. Hers was above the reception lobby and wasn’t facing the mountains.

So a tip to any future Phu Pi Maan stayers, book the mountain-facing rooms, okay?

The mountain-facing rooms are in a different building from the reception lobby. And to get there, you’ll have to climb 5 sets of steps.

Han and I climbed the stairs for the first 2 days, feeling all “hey let’s be healthy and do this shiz” but on the third day onwards, we got lazy and requested to be driven up via the buggy.

Oh, did I mention that the resort was fully Halal? Not only the food, but the whole place too because it was facing the mosque. LOL! This is great for Muslims but maybe not so good for the non-Muslims. Haha, I read some negative reviews that stated how the morning Subuh Azan woke them up from sleep at 5AM and also how breakfast is lousy because there’s no bacon.

But eh, if you can live without the bacon, breakfast was perfect. The view from the restaurant was amazing..

… and they had FREE FLOW THAI MILK TEA!

I must say that the resort was quite a distance from Ao Nang Beach, though. But it wasn’t much of an issue for us because they had hourly free shuttle buses to bring us back and forth.

But I reckon if you want to burn off the calories from eating all the yummy street food, the 15 minutes walk to and fro would do you good!

There was a restaurant within the Phu Pi Maan resort compounds that also conducted cooking classes!! So obviously, I decided we should do that on my birthday. And the food was so goood.

We had to choose a set menu each, so Han chose Noodles and I chose Tom Yam. We initially thought we were just cooking one dish from each set menu but turned out we had to cook all 3 dishes on the menu. So imagine our surprise after we finished cooking and feeling full from eating our first dishes, the Chef told us to get ready to cook the next dish. 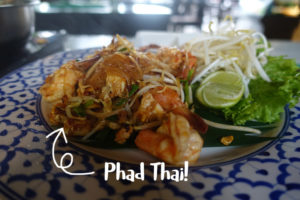 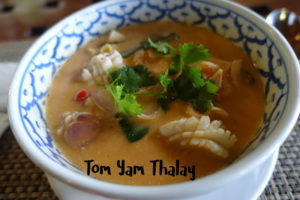 I wish I could say that Han and I can cook Thai dishes now but haha ini semua auta aja. We don’t really remember the steps because all the ingredients were prepared for us already and we just followed what the chef told us to do. 😛

So seriously now, if you’re in need of a short getaway to just nua, consider a stay at Phu Pi Maan resort! They have everything you need there – a gym, kids’ playground, two swimming pools, nice scenery, jacuzzi (if you stay in a Premium Spa Room like ours!), a library, spa, great food.

Han did a short room tour video, you can check it out 🙂

No matter how comfortable it was to stay in (lol), we eventually decided to just head out to find something to do. We were pretty lucky to have one fine day with clear skies despite it being the monsoon season. So we booked this 7 island sunset tour at one of the many tourist travel kiosks while we were walking along the Ao Nang line of shops. Maybe it’s because of my dislike for tours but there was just something about this tour that was rather.. underwhelming? There were so many tourists, the tour guide wasn’t very informative and there were some islands (ie Chicken Island and Tup Island) that weren’t really worth visiting at all.

But negative points asideee, the other beaches we visited were really beautiful!! One of my favourites was Poda Island!

When you Google for Krabi, you’ll probably think all the beautiful beaches that show up in the results are at Krabi itself. They’re not, they’re actually beaches of other islands that you must take a boat to. Ao Nang Beach at Krabi is really underwhelming actually haha.

I also got to snorkel for the very first time! Apparently, the water is not as clear and diverse as Redang or wherever else but eh, it was still fun. We not only snorkelled in the day, we also snorkelled at night amongst bio-luminescent planktons!

Snorkeling at night was scary, guys. Haha, imagine jumping into pitch-black waters in the middle of the sea.

But the moment we were in and the water around us started lighting up, it was really cool! It’s pretty faint though and you can’t really capture it on mere mortal cameras. >.< I had to Google for a photo on the internet to show you, see below!

Dinner was included in the tour. We had ours at Railay and it was pretty good. There was a boxing ring in the middle of the restaurant but since it was a Wednesday, no Muay Thai at all 🙁 bummer. Maybe when we go BKK next perhaps? 😀

They ended the tour with a fire-show! That was pretty spectacular, but paranoid me also feared the can on fire would somehow detach and you know, light us audience up on fire. But no such thing happened so we’re all good. 😛

So yes! Despite just being there for about 3 and a half days (our departure was quite early) in Krabi, it was really the break we needed. Krabi is definitely a good place to go to for a change in scenery. And you must try out Phu Pi Maan Resort, okay? If you’ve been to Krabi and had a great time too, I’d love to hear your experience! Be sure to leave your comments below!

Look out for my next post on our trip to Perth okay!

2 thoughts on “A Year Later: Our Krabi Escapade”